Ten years ago, I was a redhead, had just done my first voiceover job, graduated college with my BA in Theatre Arts, and thought I was on my way to New York City to be the next Belle in Beauty and the Beast on Broadway.
Needless to say, life had other plans. 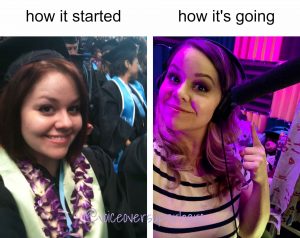 And I’m learning… that’s okay.
Even if I’m “too old” to play Belle now, but that’s a post for another time.
I had no idea back then how much my life would begin to change right after this picture was taken at graduation. Some of it has been really, really hard. But some of it has also been absolutely beautiful. I am grateful for everything I’ve learned along the way.
When I was sixteen, I wanted to be a working actor when I grew up. When I graduated college, I still wanted to be a working actor.
Now, ten years later, I’m a working actor (and still not rocking my natural hair color). I didn’t think voiceover was how it would happen, but being in the voice acting community has introduced me to some of the best people I’ve ever known.
I’ll never totally give up those Broadway dreams, because I will always be a theatre kid at heart, but I’m really happy with where my career is now, and where it’s going. It’s taken years to get here, and there were days I wanted to give up. A wise director once told me that things would happen for me in my own way and in my own time, and I’ve never forgotten those words.
If you’re still on the road to your dreams, just keep going. You’ll get there ❤

Have You Gone Off Track?
Is it REALLY your dream?
living well is the best revenge?
Superheroes: More Than a Trend I’m a voice actor, but…
Scroll to top