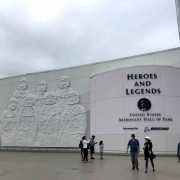 … and what a giant leap it was.

I was lucky enough to hear stories about it first-hand from those who were there, both in person and watching it on television with people around the world.

Although I wasn’t there, getting to relive those memories with people who were is a memory I’ll always cherish and never forget.

Neil Armstrong, Buzz Aldrin, and Michael Collins were names I knew very well when I was growing up. Many summers of my childhood consisted of pool parties like your average kid, with visits to JPL, conventions, Planetary Society meetings, and gatherings to watch Mars landings sprinkled in between.

52 years ago today, the impossible happened.

We learned more about science, our world, and the mysteries of the cosmos.

We learned that the impossible WAS actually possible.

We believed we could achieve anything.

That’s the spirit I’m carrying with me today.

I hope it inspires you today, too ❤